My poor boy has been eating porridge for the past few days cos his mommy was crazily trying to perfect her recipes with swiss roll and Ogura cakes. Despite, he had no complaints and was still happily gulping down all his food. I started to feel guilty. Thus I made a trip to the market and brought back some fresh staples so I can prepare some exciting meals for the cutie pie.
I initiated the cook-along event for the mommies network in Facebook which involves cooking with pumpkin this month, so I'm gonna prepare a pasta sauce with pumpkin, at the same time, I also wanted to join the Cook Like a Star featuring Ree Drummond's recipe, so I browsed through her recipe list for pasta sauce inspiration, I think it would be quite easy, cos pumpkin is quite a 'ranch' type of ingredient (hahaa.. if you've been following my previous post, you would have remembered I described Ree as a 'ranch' kind of chef). I stopped at this one - Pasta with Tomato Cream Sauce, the basic ingredients were onion, garlic, tomato and cream, sounds great!! (bear in mind, I'm cooking for an 11month old baby).

Tomato is something I am yet to introduce to the lil' fella. It is an acidic fruit. Yes, it's a fruit, not vege. And there may be a risk of diaper rash from consuming acidic food. But now that the lil' fella is 11month old (actually, he's yet to turn 11month end of the month), I would like to gradually introduce tomato (such a versatile ingredient) to him, fingers crossed he's gonna handle it fine. Since it's his first trial, I'm not gonna use too much of it, so I'm gonna make some adjustment (as usual) to Ree's basic tomato cream sauce recipe and turn it to a baby-friendly recipe.

I made up mine with pumpkin (of course) and also sweet potato (to render it a natural sweetness and also the creaminess). I also bought some baby corn, so I decided to chuck some in. 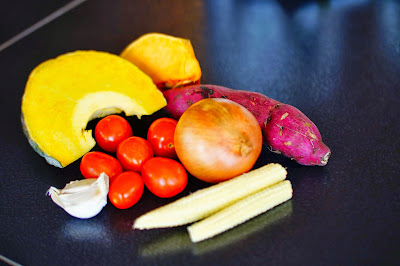 I was at work when I prepared this pasta sauce, so I didn't have the facility to stir-fry the garlic and onion for added fragrance (I recommend that you do it). I just chucked everything into a stainless steel bowl, seasoned with pinch of herbs (which has red pepper flakes, basil, black pepper etc) and steamed for about 30min till sweet potato turned soft.

I let it cool, then blitz everything into a blender. Check out how creamy the pasta sauce turned out to be. I have prepared a similar kind of pasta sauce for him before, but sans the tomato. This time, with the tomato, it is different, its taste has a little zing to it, very appetizing. Even without the grated cheese, it already tastes good on its own. I'm sure the lil' fella will love it! (Note, this recipe was prepared without salt, even my mom was surprised how good it tasted). 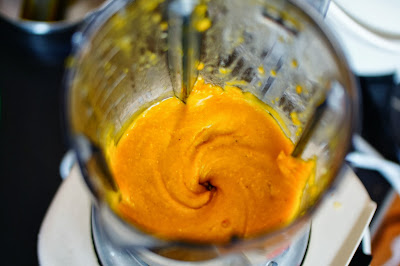 Ree added cream to her tomato cream sauce (that's the reason why it's called cream sauce, right?). I haven't got any cream at home. So I just replaced it with a dollop of full-fat greek yogurt. I didn't need a lot of that, cos the sauce was already quite creamy to start with.

I was hoping that my sauce will have the reddish tinge like Ree's, but I guess because mine hasn't got much tomato to start with, it was a little on the dull yellow side. Anyway, who cares? So long it tastes good, ay?

The recipe I used above makes about 3 batches of pasta sauce for the lil' fella, so I freeze them in their individual serving portion in my breastmilk storage bottles (found good use for them). I'm going away for about a week and my mom's gonna help care for the lil' fella. My mom can just thaw them, steam them and serve with boiled pasta. 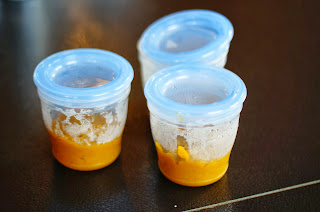 At 11th month, the lil' fella has tried out quite a variety of pasta, both gluten-free or those with gluten. This time, I'm letting him try this cute looking tiny pasta known as 'corallini' *Organic Corallini, made in Italy. It's a type of tiny short tube pasta that cooks quite easily and quickly. Its texture turns out to be really soft but still maintains a bit of bite to it, just great for the lil' fella (he loves food with texture, with only 4 pearly whites at the moment). ﻿

For recipe of my cous cous salad, please refer here.

Note:
1. This is such a versatile sauce. You may serve it with pasta, or have it over pizza base and topped with grated cheddar cheese. Alternative, it will also make a tasty soup. Just dilute it with some stocks and thicken with heavy cream or yogurt.
2. You may also cook it with meat of your choice. My boy remains a pescatarian until he turns 12month old soon.

This post is linked to the cooking/baking event, Yummy Homemade BabyFood, organized by me and Healthy Food for My Baby. To join, simply cook and bake any dishes for your babies under 2, using pumpkin (for month of September 2013). For more details, please see this. 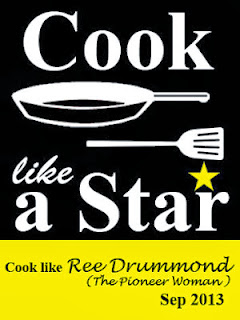 I am also linking this post to Cook like a Star, organised by Zoe from Bake for Happy Kids, Yen from Eat your heart out and Mich from Piece of Cake. Wanna cook or bake like Ree Drummond? To join, simply cook or bake any recipe from The Pioneer Woman or her cookbooks and link with us at this Zoe's, this Yen's or this Mich's post for the whole month of September 2013.
Posted by Unknown at 4:33 PM