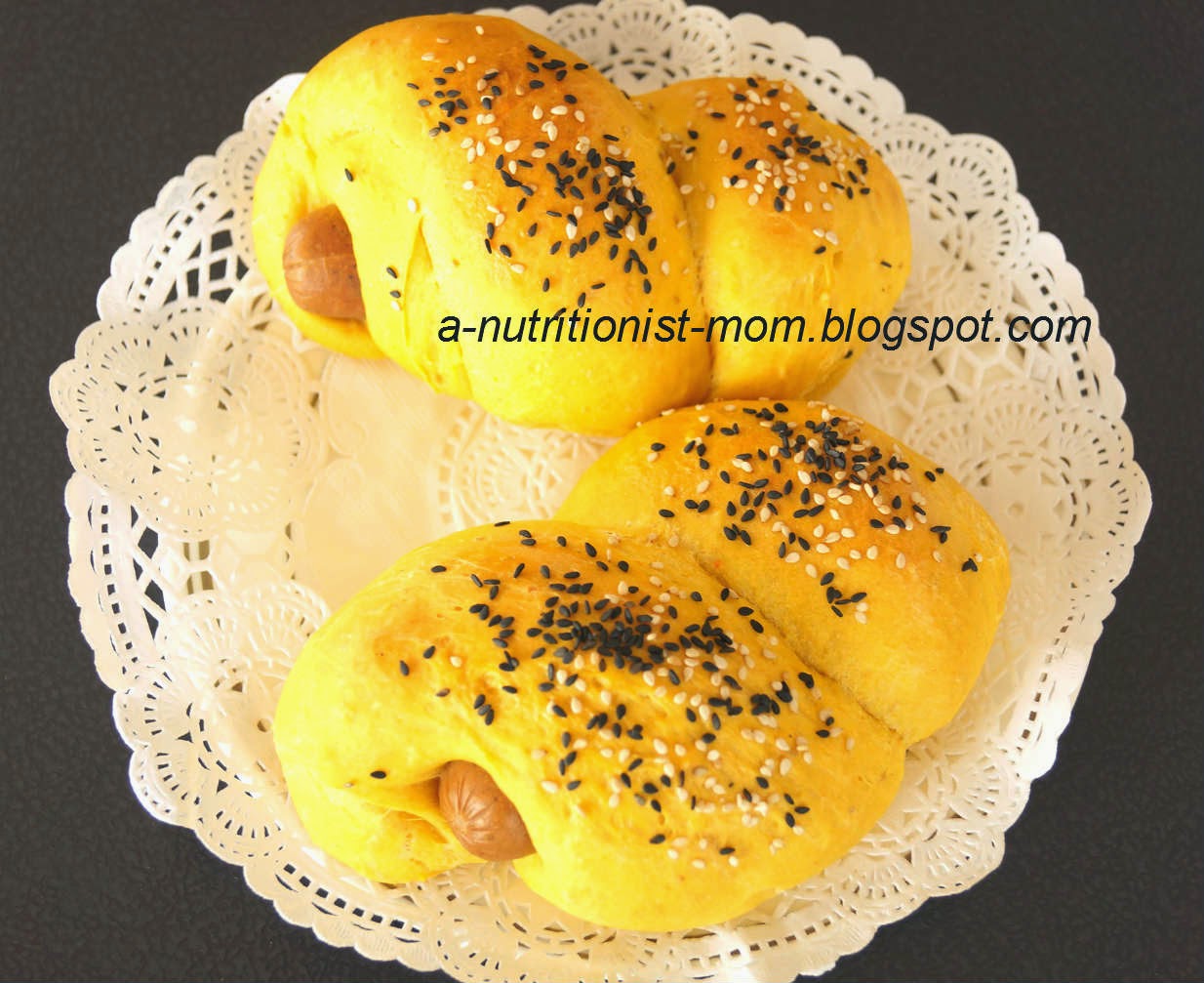 Sausage versus carrot and goji - 一个被视为不大健康的，一个听到都知道是健康入骨的，两个在一起成了一个非常强烈的对比，味道又会是怎么样的呢？
On Sunday, both hubby and I would go out for our 'usual' yam cha sessions in the afternoon and we'll indulge in something we usually don't. We had economy noodles at the market in Pasar Tanah Merah 石咀巴刹。They taste really good. In my opinion, they sell the best economy noodles 经济粉面 in Sandakan. I always wonder, how difficult is it to prepare fried noodles? Why is it that not all of them cook good-tasting ones? My phone was sent in to repair and maintenance, so I used my hubby's phone to snap some photos of the food and posted them on FB. A friend commented, 'Never imagined that you guys would eat these kind of food, knowing the nature of Jennifer's job'. Honestly, I don't think I was shocked to see these kind of comment. It's not the first, for sure. What do you guys think a nutritionist eat?
Yep, I don't eat sausage bun everyday, or probably not even once in 6months. And neither have I been eating or buying bread or buns from outside. I have shared about the reason a few post back and I better not re-emphasize that again, in case I get mistaken that I eat apple and oat all day long.
I made this sausage bun, cos I wanted to have a change from the usual plain buns we've been eating. But sausage bun with white dough would be so plain, so I made it with a carrot and goji dough, don't you just love the golden color? Carrot and goji are both excellent foods that benefit the eye. The goji berry is among the highest source of carotenoids of all known common foods. Gojis contain 500 times the amount of vitamin C, by weight, than oranges About 11mg of iron per 100g can be found in the gojis.
The bread dough is the soft and fluffy milk bun dough that I've been using all this while. It does involve an extra step of preparing the starter dough, but the results of the bun or bread is sooo much worth it. I have stopped trying out other bread recipe, even though claimed very soft and fluffy, cos to me, I have already found 'the recipe' for my soft and fluffy bread. It was originally a recipe by Alex Goh, but I have adapted it very much making it my own recipe which works well either kneaded by hand or breadmaker. I have kneaded this dough using my faithful Donlim breadmaker.
Starter dough
To prepare the starter dough, pour boiling water over flour and stir with folk until combined to a slightly tacky dough. Cover and chill in the refrigerator. Keep for 20min before use, can keep up to 12hrs in refrigerator
Main dough (the ingredients are placed in the breadmaker according to the order they are listed):
*Other than grapeseed oil, rice bran oil is also a healthy baking oil. It is the oil extracted from the germ and inner husk of rice. It is notable for its high smoke point of 232 °C (450 °F) and its mild flavor, making it suitable for high-temperature cooking methods such as stir frying and deep frying.
1. Add all the ingredients (in the order listed above, except for the scalded dough) in breadpan.
2. Select mode no. 7 (dough 发面）. Press START.
3. When the ingredients have combined together, about 3min into kneading, add in the scalded dough by pieces.
4. After 1hr 30min, a beep alert will sound indicating that the dough is ready.
5. Remove the dough from the breadmaker.
6. On a floured surface, punch the dough to remove trapped air. Knead a few times. Form about 130g portion of dough into ball shape. Using a rolling pin, flatten into an oblong disk and roll up to form a rope shape. Roll up around the frankfurter. Brush top of bun with milk/ water or beaten egg wash, sprinkle with black and white sesame seeds.
7. Place the bun in an enclosed oven (temperature not switched on) for a second rise, about 45min, or until the buns double or at least 1.5x their original size.
8. Preheat the oven to 170deg C. Bake the buns for about 15-20min.
Attaching a photo of myself, indulging in my sausage and carrot goji bun. Happy Monday :) 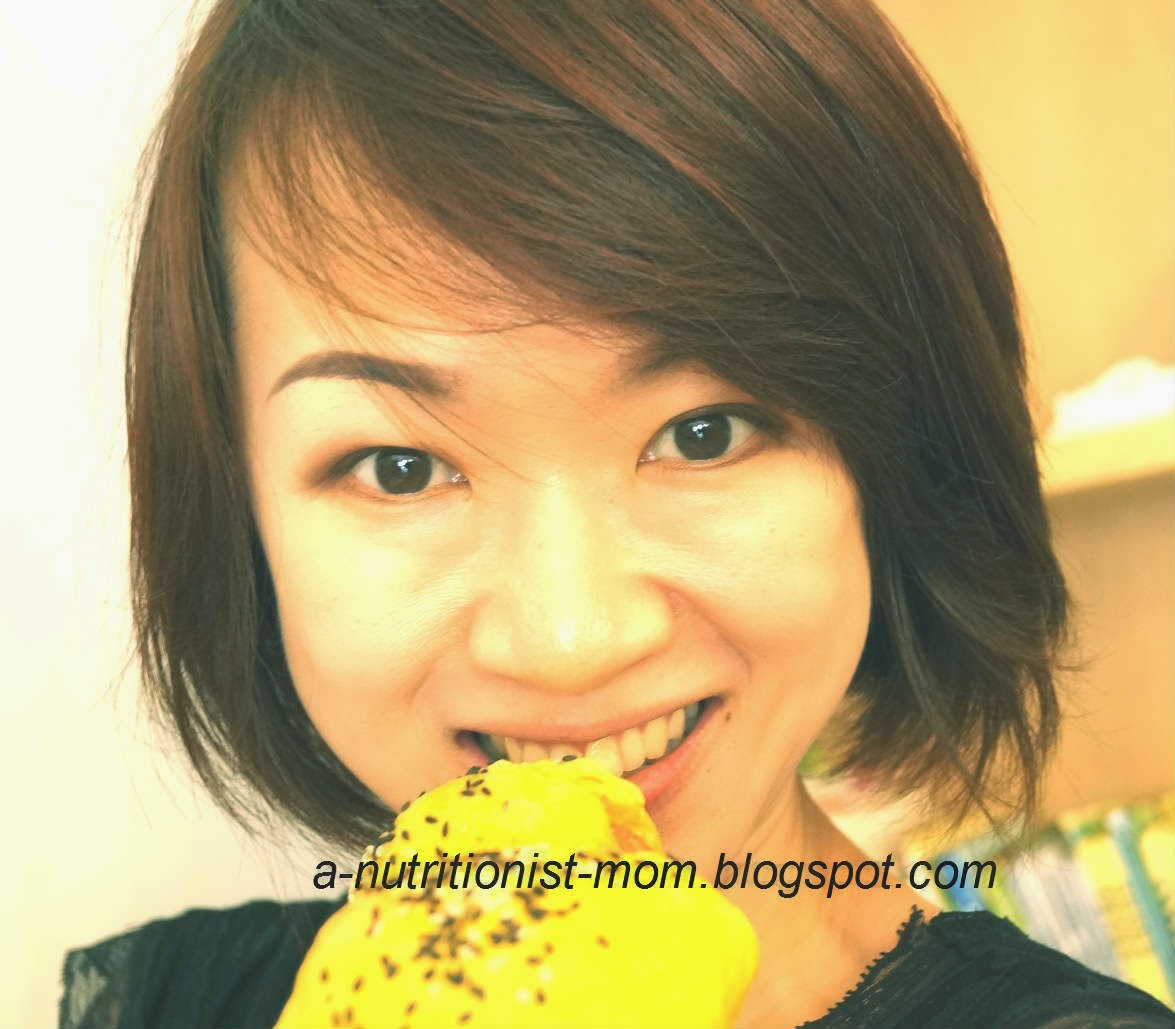