It's the last day of 2013, and I've got no bread for breakfast. And there's only little milk left for lil' fella's oatmeal. So I just made this (!!) for breakfast. Hahaa! What a brekkie! Oh well, it's a good way to end 2013, in style, indulging :p
This is actually a simple chocolate lava cake recipe by Martha Stewart. We've baked it a few times (with my baking buddies). But somehow, we either get it or not each time. It's the baking temp. and time. I keep on forgetting that I need to bake it at 200deg C (even in a fan-forced oven) at 9-10minutes!! I finally got it right this time! Just the way I want it, the way the chocolate oozes out.. Yummm!! 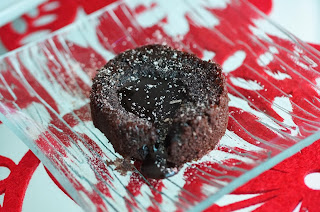 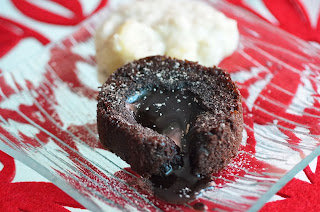 I'm submitting this post to Baby Sumo's Christmas Recipe Collection 2013 event, hosted by Baby Sumo of Eat Your Heart Out.
Posted by Unknown at 9:26 AM