Whenever mom comes back to Sandakan, she always bring back a few packets (or however much she can bring) of frozen non-baked bread that she buys from Natural Health Farm in Bintulu (there's no NHF in Sandakan). She loves them cos it's organic and it's not baked. It's steamed and we just need to re-heat it by steaming it and it can be stored in the freezer and taken out on the morning you want it. I quite like the texture too, cos it's not the soft kind of texture that doesn't fill you up like the normal bun found in any bakery, and it's not heavily salted nor sweetened. We also let the lil' fella have a piece or two whenever we have it as breakfast. However, the stock depletes after about a week.
I felt that its texture and taste is very close to the mantou/ pau I made before, it has a tinge of buttery aroma to it. Now that I still have half a carton of cream left in the fridge after baking the cupcakes for the lil fella's birthday, need to use it up quick before it goes off, I shall try to make the NHF steamed bun using the mantou/pau recipe but incorporating cream.
I also have close to a kilo of flour in the fridge, the problem with it is, I DO NOT KNOW WHAT FLOUR IT IS!? Cos I forgot to label the container after I removed the flour from its original packaging. I tried to recall but to no avail. It could be all purpose flour or bread flour. I made the decision to take the risk using them for this recipe, cos it's possible to make mantou with either all purpose flour (produce moderately soft texture) or bread flour (produce firmer texture). I previously used cake flour or superfine flour to  make pau, and the texture came out really soft. Actually, I can also use this 'unknown' flour of mine to make pizza base, cos pizza base too, can be made with either A.P. or bread flour, but mom cant take too much of baked stuffs, she claimed that they give her heatiness. O.. well.. steamed bun it is then.
Ta da... here's my steamed bun. 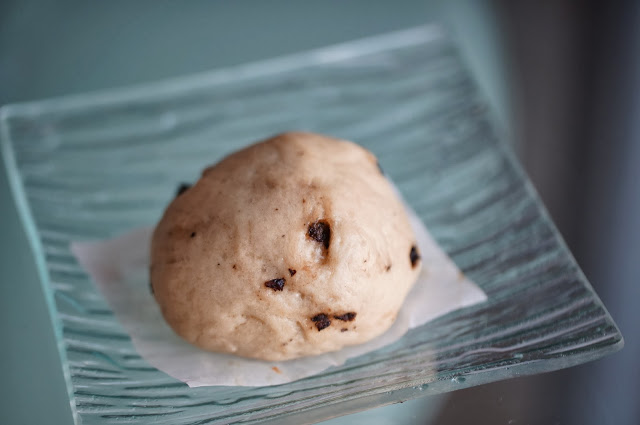 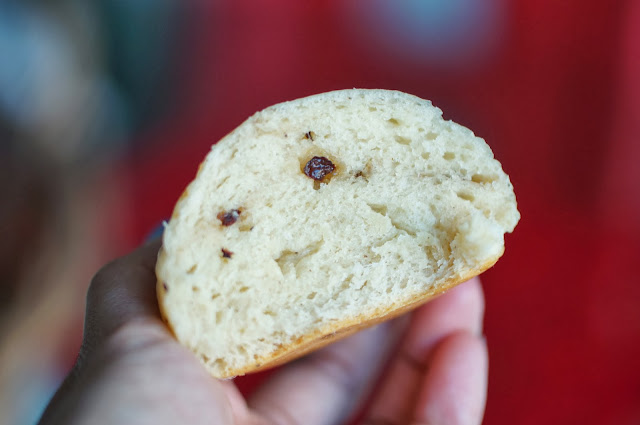 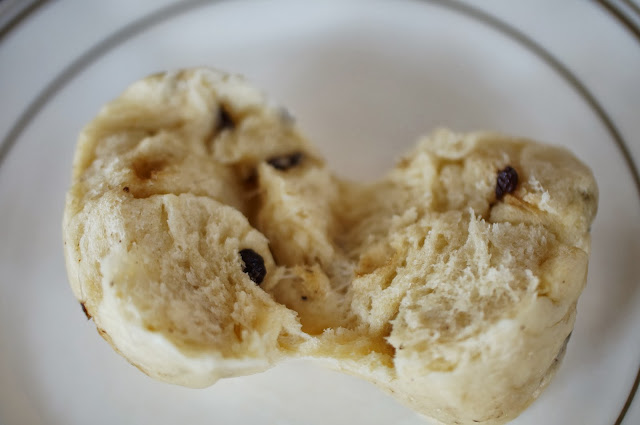 Verdict: its texture is about 95% close to the NHF steamed bread (or they called it the bread of life). Yeah! Success!! It has that buttery flavor in it cos I used cream to replace milk/water. In the end, I still couldn't figure if it's A.P or bread flour I have in the container, it can highly be bread flour cos the texture is not the 'super-soft' type. But if you're a beginner in making pau/mantou/bread and you want a soft one, I would advice you to work with A.P. flour or superfine flour.
Recipe modified and translated from Carol.
First, I have to make a starter dough. According to Carol, having a starter dough improves the fragrance and texture to great extent. I left mine in room temperature for about 3hours for it to double its size. It didn't proof when in the fridge.
Recipe for starter dough:
Recipe for the raisin bun:
*You can use milk to replace heavy cream, but add in about 30g butter for that buttery aroma (also optional).
This is a recipe that's suitable for toddler (aged one year and above).