Earlier on this year, I was asked,

She asked again, 'Why aren't you sending him to a nursery? So he can learns to write and read.'

Now, that's exactly the reason why I wasn't sending him to a nursery, I did not want him to write yet, at the tender age of 3!! Or 2 ish to be exact.

I myself only started going to school when I was 6, and that was probably the time I started learning to write. I remembered I knew how to spell 'Elephant' and I thought I was the smartest girl in class. At that time, no one told me I wasn't.

Few weeks later, I met a friend with a son at about J's age. I casually asked, 'How's little K doing in nursery?'. She answered, 'He's good. He loves it there. But the teacher told me he hates writing!'. She continued to say, 'The teachers let him bring home some homework, and they are mainly tracing and writing sheets'.

Exactly! How can a three year old loves writing when he is not developmentally or physically ready as yet? I am not too sure about this, but personally I am not going to force J to write before the age of 3. At the early stage, he won't be using the right force and strength from his fingers or even hands to write, majority of the force may be from the shoulder or the arm and it can be physically strenuous to the little one.

At this stage at home, J is still doing mostly things that work on his fine and gross motor skills that would strengthen his little fingers and improve his dexterity, like scissor cutting, glue and pasting, water-painting (he is not keen on coloring with color pencils nor crayons, but he loves painting with water colors), play dough, scooping beans, jigsaw puzzles etc. Most importantly, these are 'FUN' to him! He barge me for these 'fun stuffs' everyday. My hubby is also quite stern that he does not want the boy to remembers his childhood being bogged with 'writing' and 'tracing' torture, because both of us grew up in 'kampung' with lots of outdoor fun stuffs, playing with dried leaves, muds, frogs in the drain and making cicak (lizard) ditch their tails.

I strongly believe that he will come to a 'writing explosion' phase when he will yearns to write and trace. I later on met a Glenn Doman advocate dad who told me the same thing, 'Your 3 year old can read, but he doesn't need to write as yet, 'cos writing is an expression that will come much later on'. At the moment, he expresses himself through colors.


I am suspecting the 'writing explosion' phase is coming. But I am not rushing yet. I am just following his lead most of the times He has been gripping his pen and asking me to hold his hand to trace. He has drawn a few circles and semi circles quite orderly. At this point of time, I know exactly what he needs. He needs his tactile numerals and letters to play with (they are the very fundamental part of any Montessori curriculum that provides them with the sensory foundation, preparing them for writing).  See here to understand better.

Each time he uses his fingers to trace the number or letter shape, a 'muscular memory' is developed and reinforced. This will translate to confidence during later attempts to write, as the hand and mind are both familiar with the movements required to form the numerals or the letters.

I am very fortunate cos a mommy friend of mine from Johor had developed these for her daughter and they are also made available for sale! You see, that's the best thing about making new friends who are moms, especially when the kids are about the same age. I am sure we wouldn't have crossed path if it wasn't because of our little ones, we knew each other when the little ones was ready to embark on the 'eating solid' phase.

This is what I do when I presented these 'Numeral Felt Cards' to little J.


The set also comes with counting cards for the little ones, allowing them to work until 10. It comes together with the wooden pegs (not marked with numbers). I have used my own wooden pegs (as seen here in these photos) which I have previously marked with numbers for reinforcing number recognition. Again, playing with the wooden pegs is another activity that practices on the fine motor movements. This comes in especially handy when the little ones had been introduced to numerals using the felt cards and this would be an activity to reinforce the concept of counting and quantity. 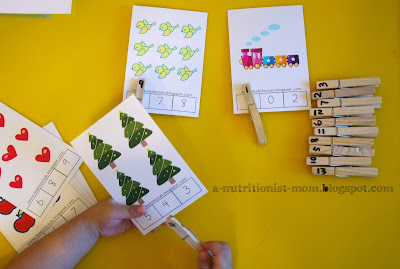 To know more about these goodies for your little curious toddlers, hop over to YJ's online blogshop here. There are also other busy bag items available for sale. There's another one that J owns and he absolutely loves it! It's the wooden blocks, somehow he calls them colorful lego. I will blog and share about that in another post. Give her facebook page a like. YJ and her partner (who's also a mom) are constantly sharing ideas on games and activities for their little cutie pies.

Email ThisBlogThis!Share to TwitterShare to FacebookShare to Pinterest
Labels: activities for little ones, lil' fella, tot school at home