When I was in the UK, there's this rice pudding by the brand of Ambrosia which I was in love with. I loved it cos it was claimed to be something so low in calories yet it was creamily delicious. I preferred it over a yogurt especially during the winter times, cos I could pop it into the microwave and heat it up and have it as a nice warm dessert or a teatime snack (didn't like eating anything cold when the weather was already so cold). But I never find it after I returned to Malaysia. The last time I had it was about 2 years back when we went for sis in law's graduation. The things I would always buy and eat whenever I get back to the UK: Muller's yogurt (those with toppings at the corner) - especially its vanilla flavor, yum!, Ambrosia rice pudding and the McVities Jaffa cakes. Hahaa... I have weird taste bud. But these are the things I would buy a lot and eat whenever I'm there. I couldn't get them here in Malaysia.


So in order to satisfy my occasional cravings, I decided to make my own rice pudding. Compared to Jaffa cakes, rice pudding seems like an easy one. Chose a recipe by Bill Granger, cos it's his month with 'Cook Like A Star' cook/bake along event.
Like usual, I cooked the rice ahead (the night before), so that I can have the rice pudding ready for breakfast for myself and the lil' fella. The texture and flavor was almost there, but with only one problem, the rice!! I believe Arborio rice (the one usually used for risotto) would be the best rice to use for rice pudding, it gets creamy yet still retain that bite to it. I don't have that at home. All I have is brown rice. Hahaaa.. so I added in extra 2tbsp of rolled oat to it, to try to mimic the creaminess. Not too bad at all ... 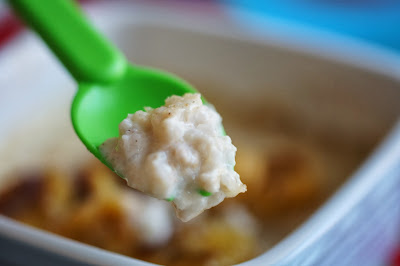 Here's the recipe, adapted from Bill's chilled rice pudding with caramelized pineapple
Cook rice ahead.
Preheat oven to 160deg (fan-forced).
Mix all ingredients in a ceramic baking dish. Bake for about 20-30min. During this time, I prepare the caramelized banana.

Heat up butter in a shallow pan, toast banana with brown sugar and cinnamon in butter, until the banana is golden and caramelized. Serve with baked rice pudding.

I'm linking this post to Cook like a Star (Bill Granger), organised by Zoe, Bake for Happy Kids, Yen from Eat your heart out and Mich from Piece of Cake.

I am also linking this post to Little Thumbs Up organised by Zoe of Bake for Happy Kids and Doreen of My Little Favourite DIY and hosted by Vivian of Vivian Pang's Kitchen.
Posted by Unknown at 8:59 AM