Flying with a little one: suriving my plane trips travelling with a toddler

The little fella is turning 19mo in a few day's time. And yes, we're travelling, again. We just got back from Seoul about two weeks back and we're leaving for Bali in a day's time. There's a long weekend coming up, due to Harvest Festival (Pesta Keamatan) and my in-laws has decided to treat all of us a short getaway to Bali. Even though we are still flying with an active toddler boy, I'm no more nervous about the trip nor the flight. I used to get nervous about it planning about his food/ snack intake, pre-booking his bassinet, pre-scheduling his nap time etc etc. Maybe I get used or get immune to it. Tips I wanna let very parent know, no, you won't be able to foresee nor plan anything when travelling with a toddler. He slept the entire journey flying from KK to Bali (amazingly!!), and stayed awake the entire journey coming back. Despite your best efforts, there is only so much you can do. You just gotta let yourself know, it'll eventually pass and the plane will land, and you won't be seeing any of the other passengers ever again. Hopefully. Hahaaa
At 19mo, the little fella has done quite a number of overseas travelling and handful of long-haul travels. He isn't the perfect little traveler everyone think he is, but he's still our fun and cheeky munchkin who loves greeting every strangers he sees with a shy grin. We have no fear bringing him along for trips cos he has no fear for strangers nor new environment. In fact, he actually gets excited about them and he gets occupied by the new things he sees, which is great for us. He's quite an observing baby. He loves shouting out 'airpane' 'airpane' 'airpane' when he sees one, or anything that resembles or sounds like one.
Babywearing him on trips help tremendously!! Seriously, my i-angel hipseat carrier is Godsend, especially when travelling in cities that are not so baby-friendly, like Bangkok or Seoul, eg small alley with uneven ground or underground station with just stairs but not lift (can't imagine what it's like lugging along a stroller in these cities), or going to places where we'll be doing island hopping or dolphin watching (in Bali). When babywearing, I went through custom at ease without needing to move him a bit (which is good if he's napping) and it allowed me to have both hands free to carry his diaper bags and our passports (great for solo travelers). 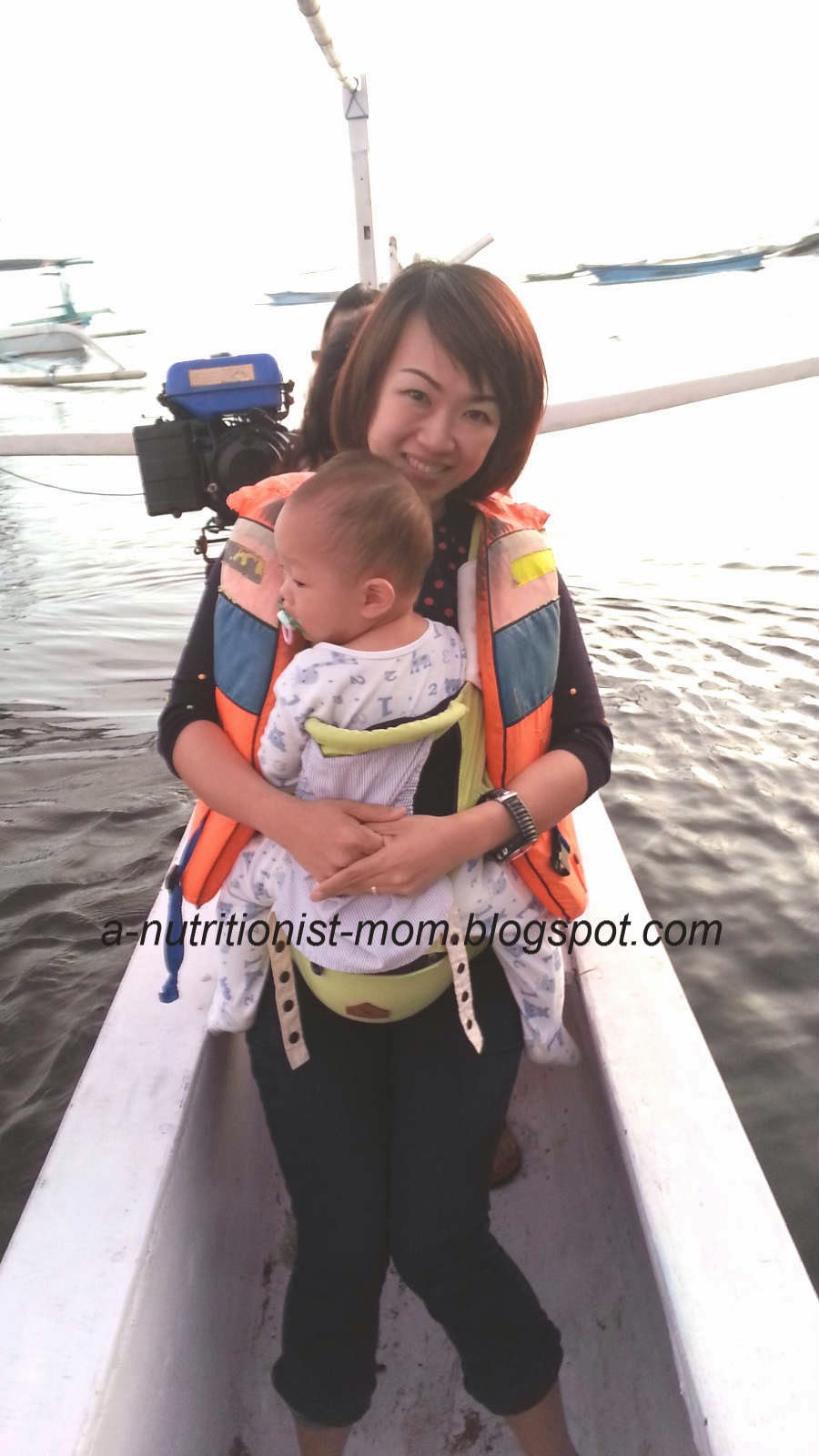 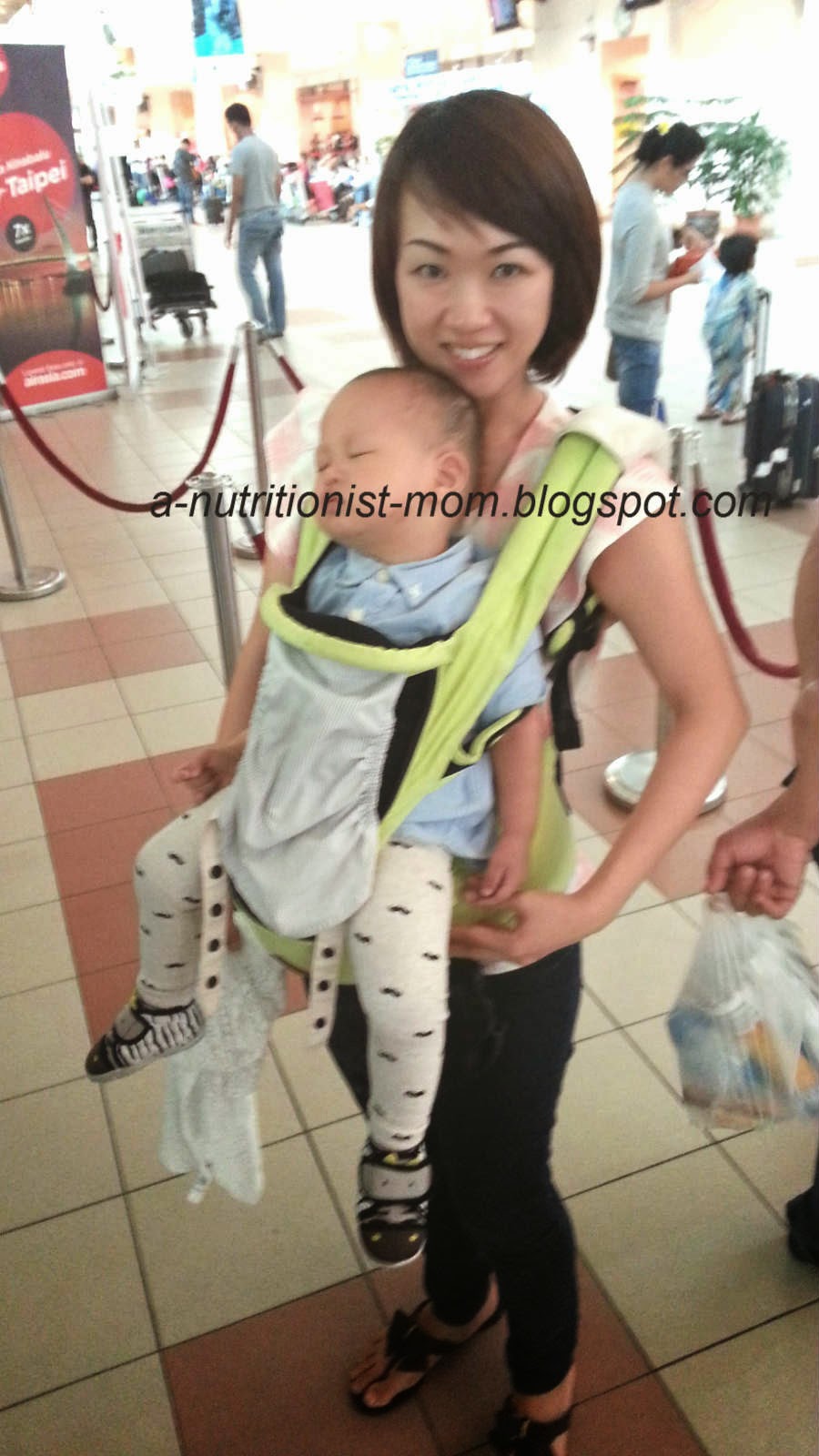 I own an I-angel hipseat carrier that allows for front facing or rear facing (facing towards me) or back carry too. I have done a 3-part reviews on it here, please refer for the links http://a-nutritionist-mom.blogspot.com/2013/09/babywearing-and-travelling-to-kundasang.html. Just Health is now one of the authorized retailer of I-angel hipseat carrier. You may email me for further info.
Prior to your trips, call up your flight agency (Malaysia Airlines for my case) and pre-book a bassinet for your toddler (only available for under two year old) and you'll be assigned a seat on the front roll, cos the bassinet can only be installed there. Try calling up as soon as you have booked your ticket, certain flights only allow one bassinet. Bassinets are only provided on flights that's over 2hours flying duration, and are only installed after the plane has taken off (the seatbelt sign is off) and will be removed before the plane starts to descend.
By experience, most of budget airlines (for eg Air Asia) doesn't provide bassinet for domestic route even though with over 2hours flying duration. But they do provide bassinet for international routes with Air Asia X. There is no need to call up early for bassinet, but you'll have to purchase yourself a seat that has the 'bassinet' or 'baby' sign when selecting your seats.

If it's a long haul flight, try choosing one that flies at midnight so that he'll be sleeping most of the journey. We flew from KL to Seoul at 1am, he slept from about 1:30 till about 7am and was up just before the air crew was preparing for landing and was asking to uninstall the bassinet.
Now, these are the tips or activities you can do with your toddler to occupy the time spent on flights, that's if he has no intention or whatsoever to nap: 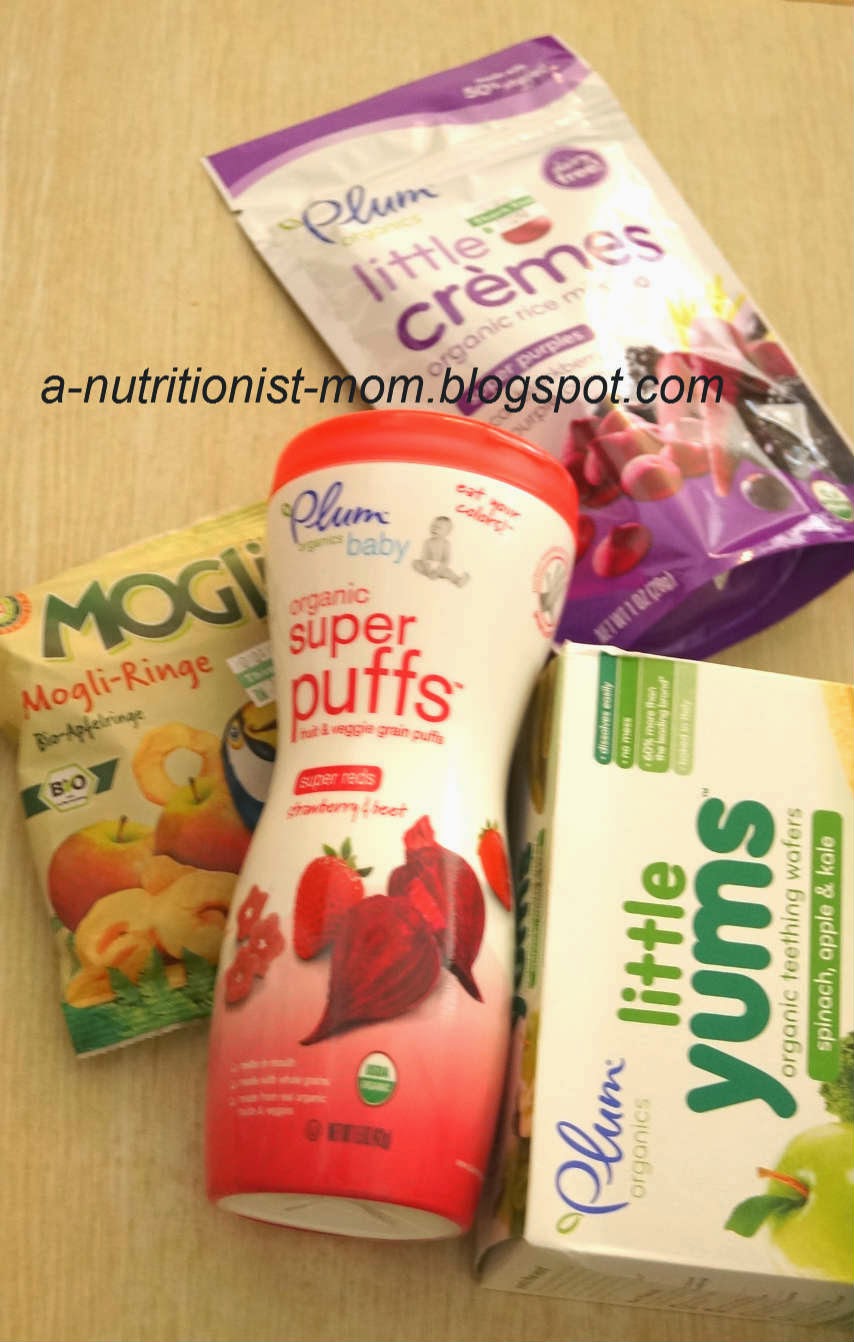 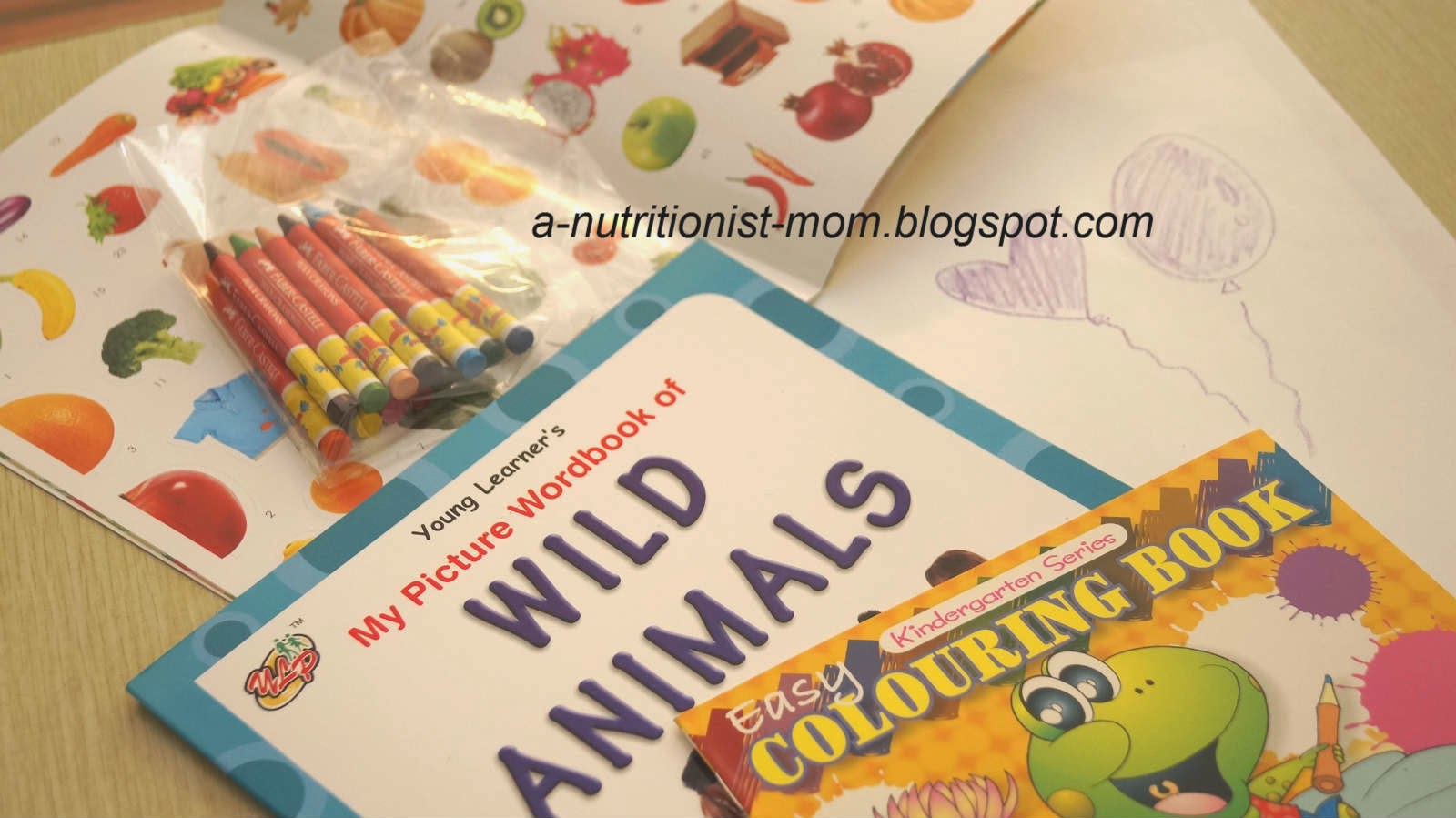 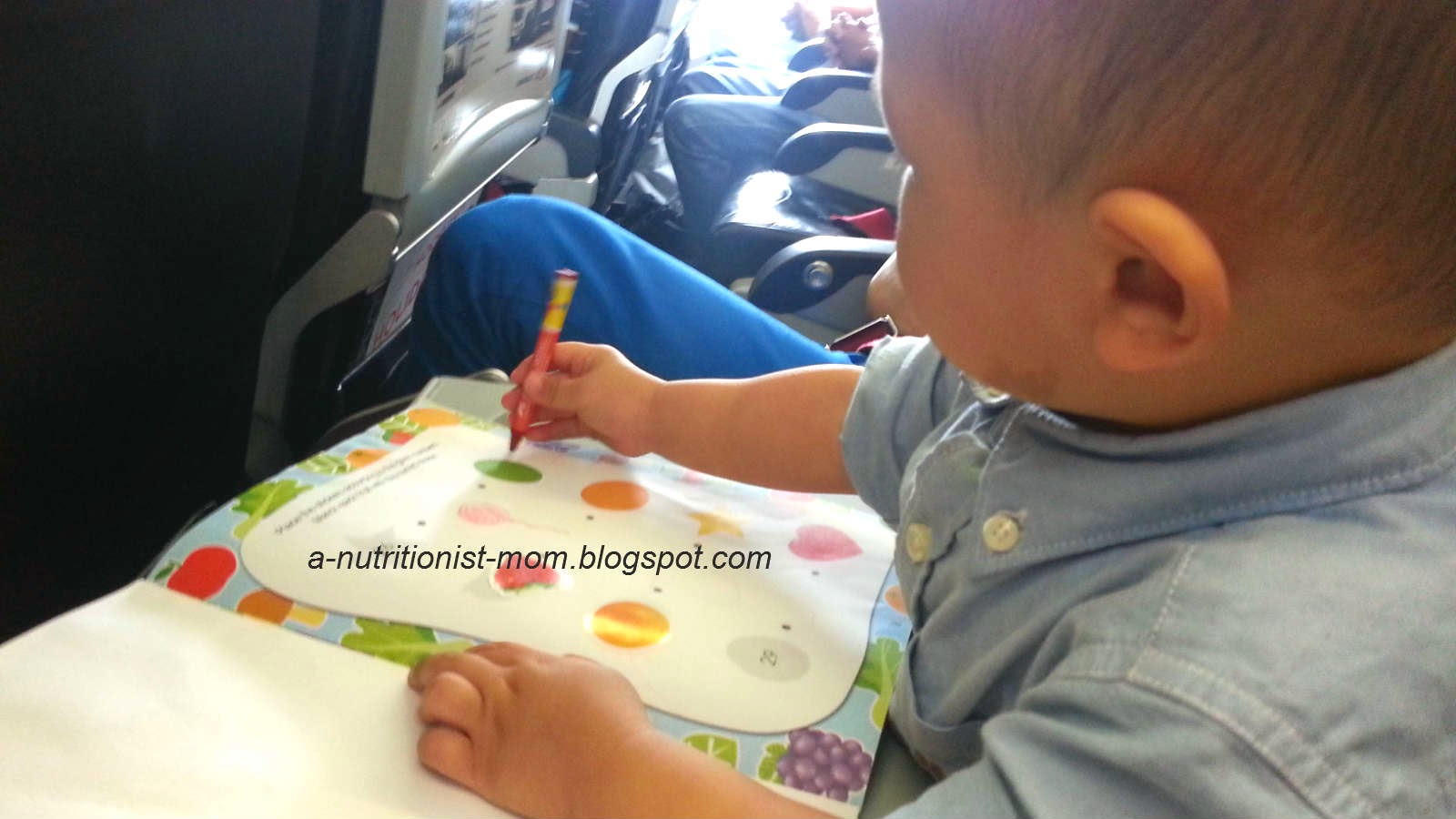 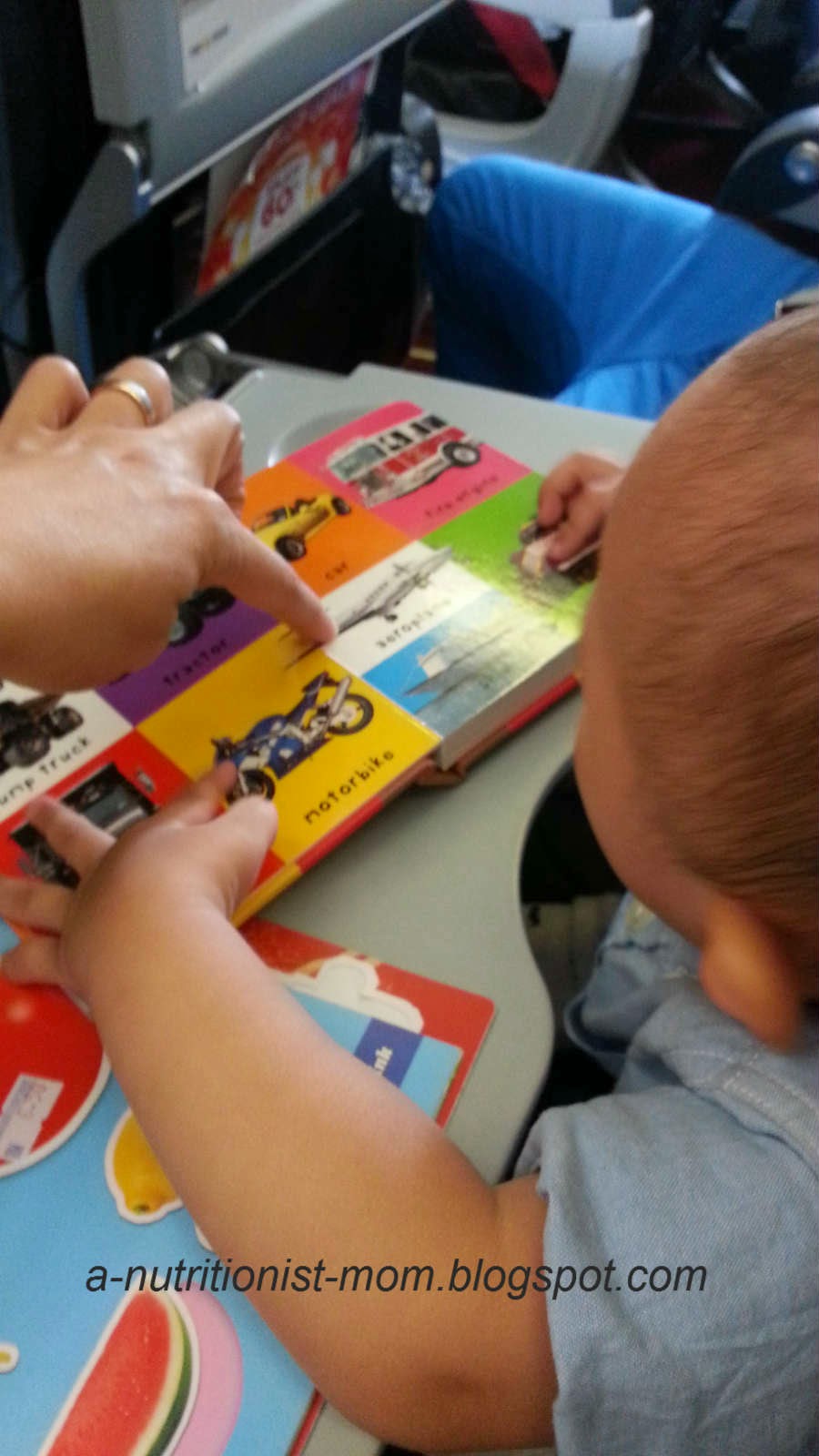 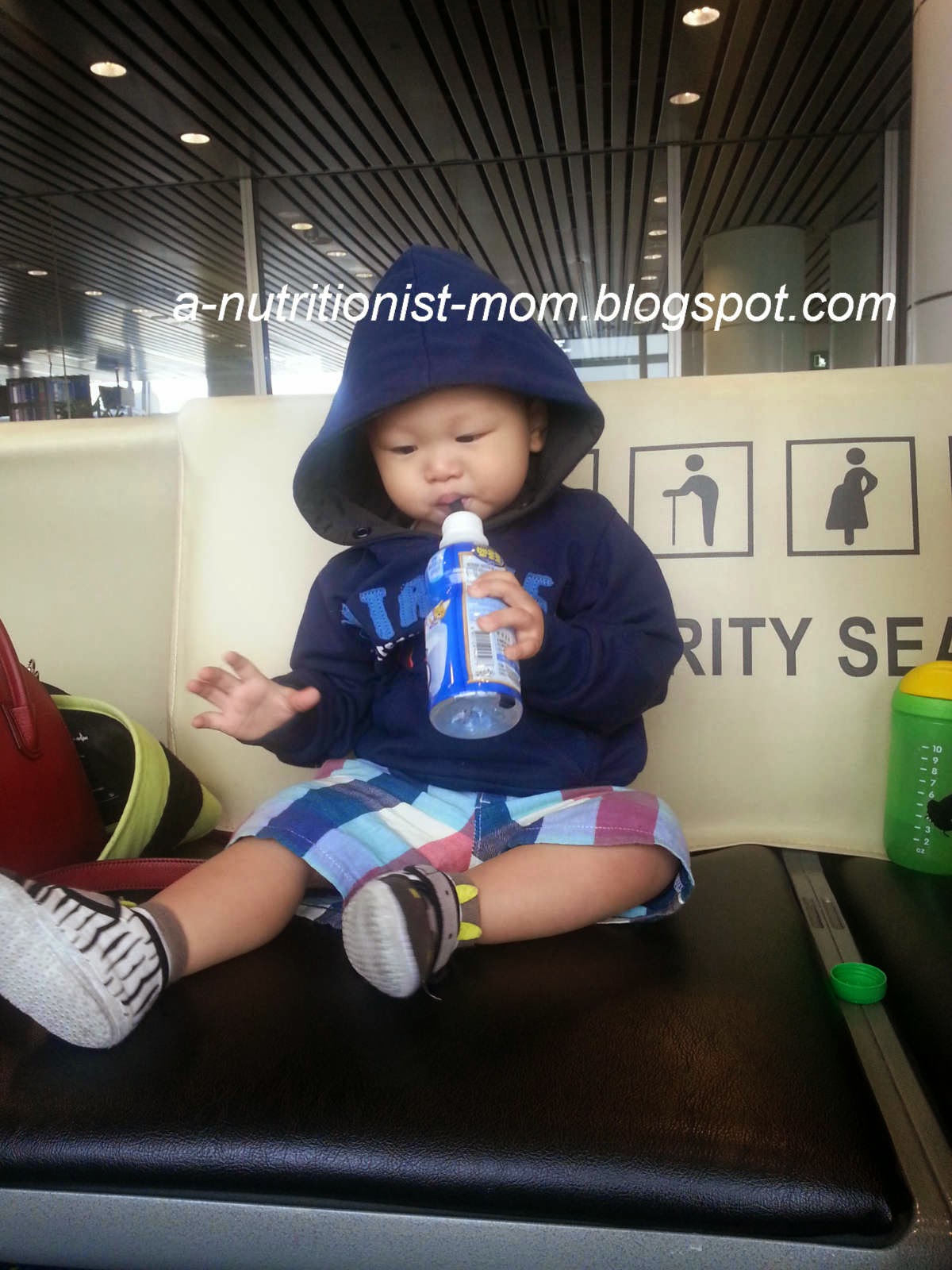 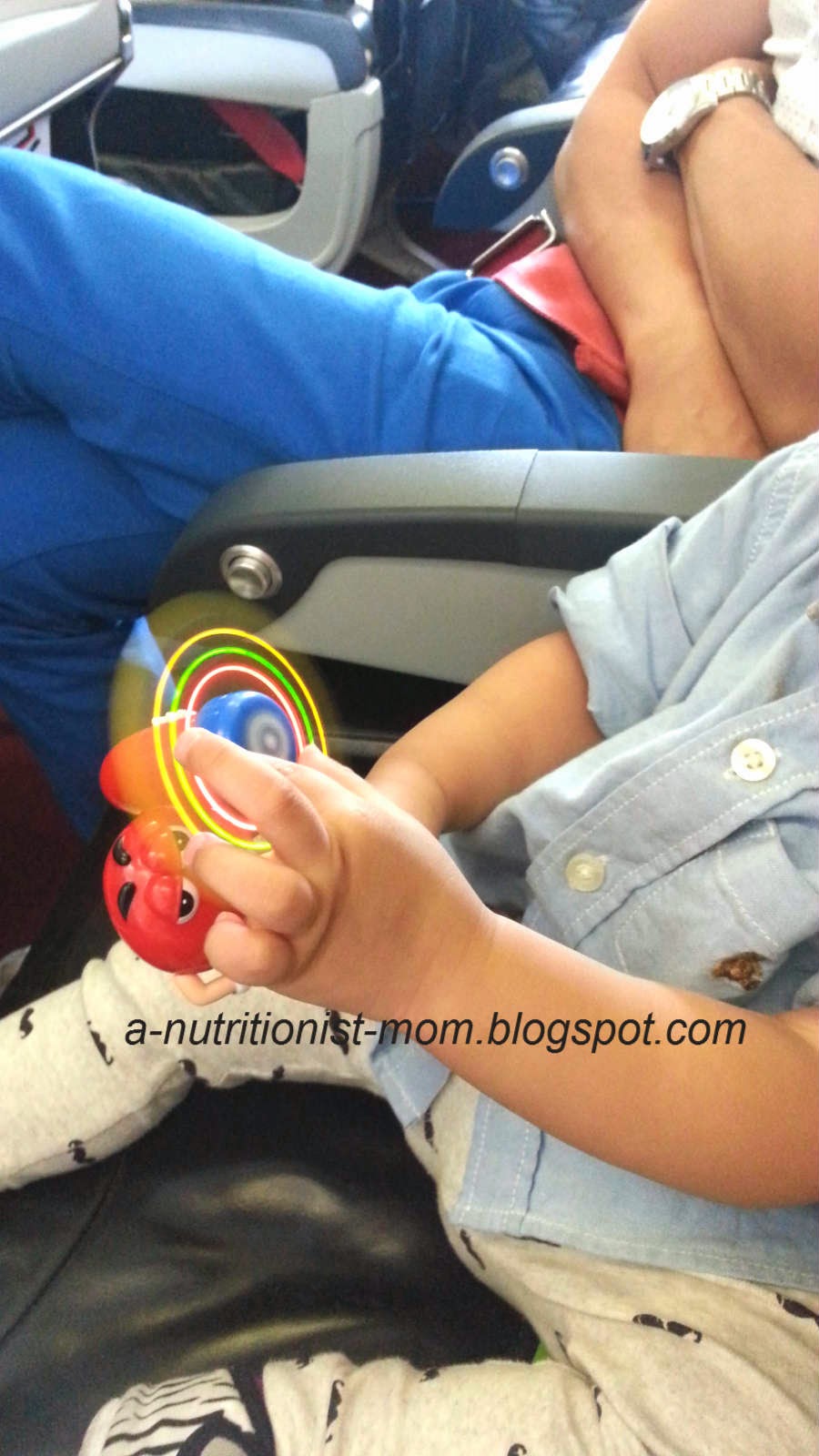 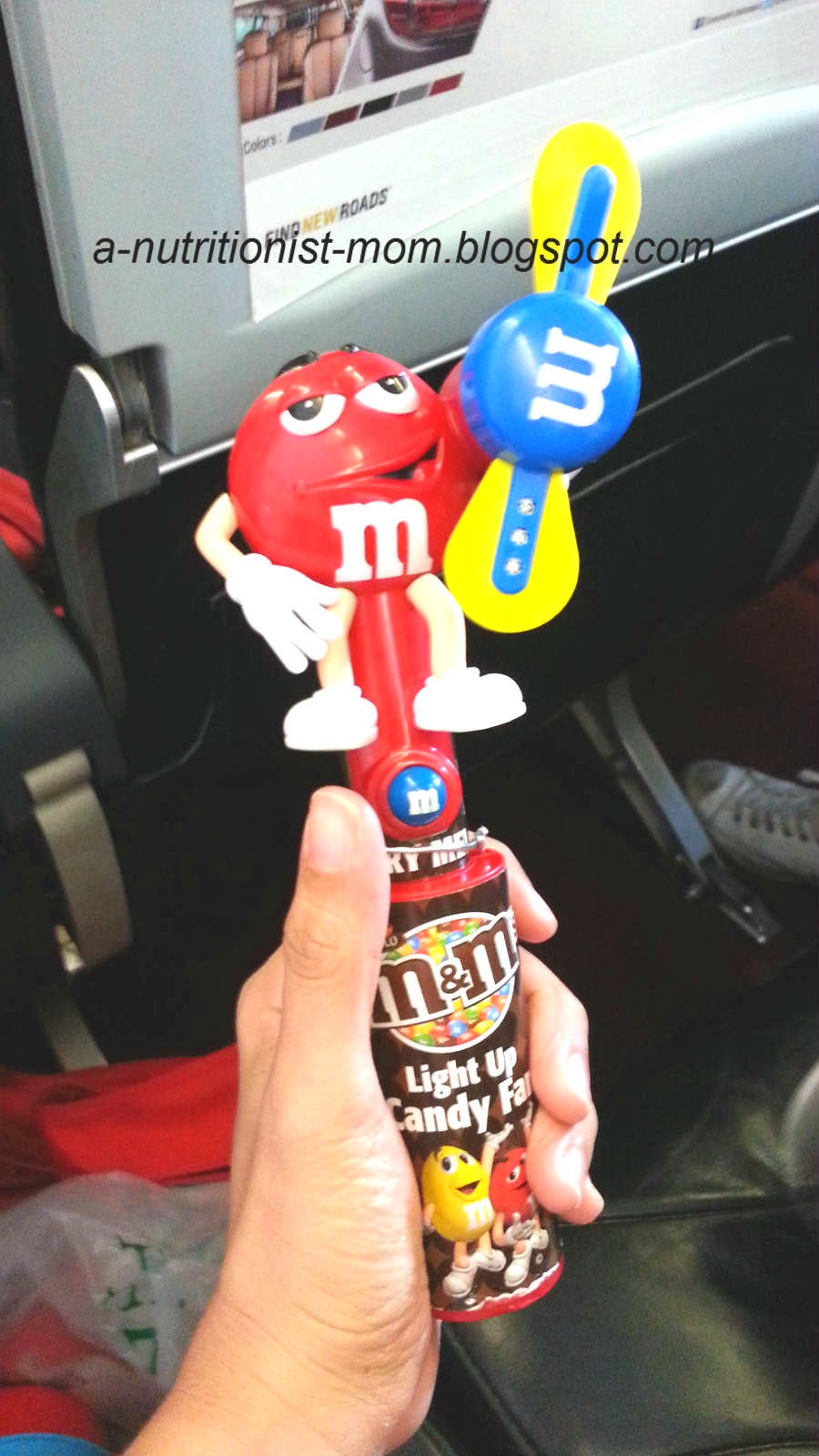 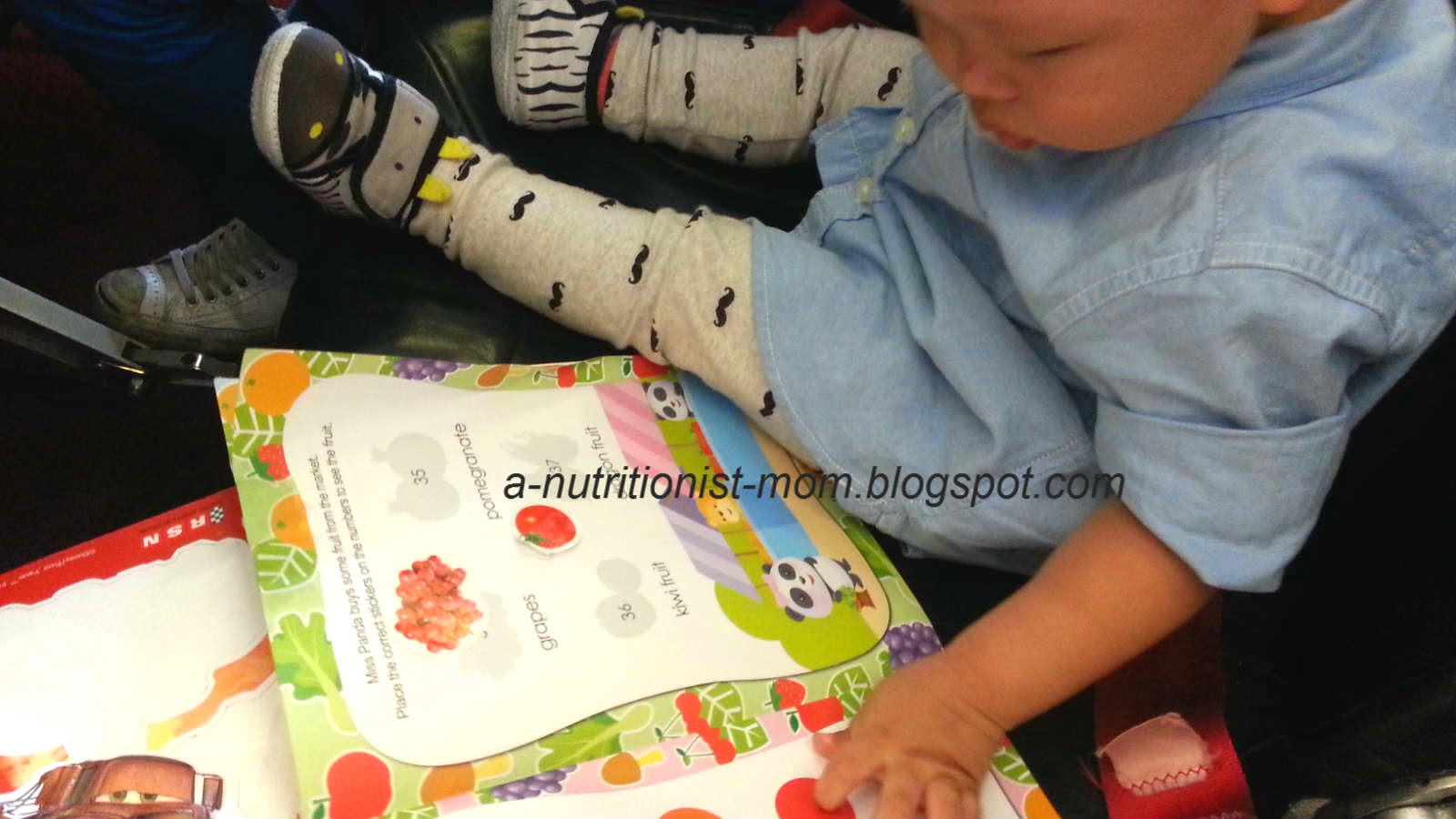 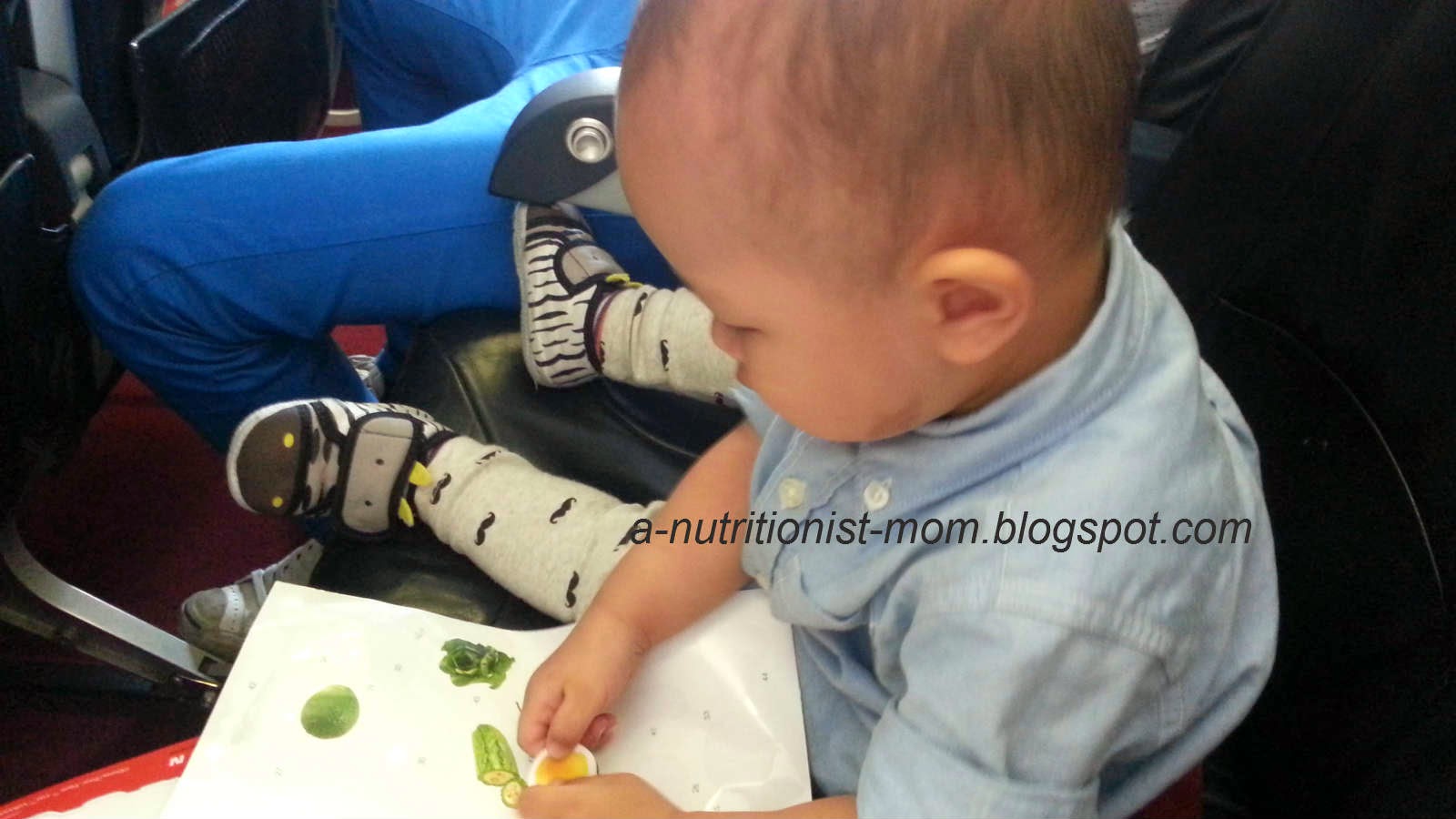 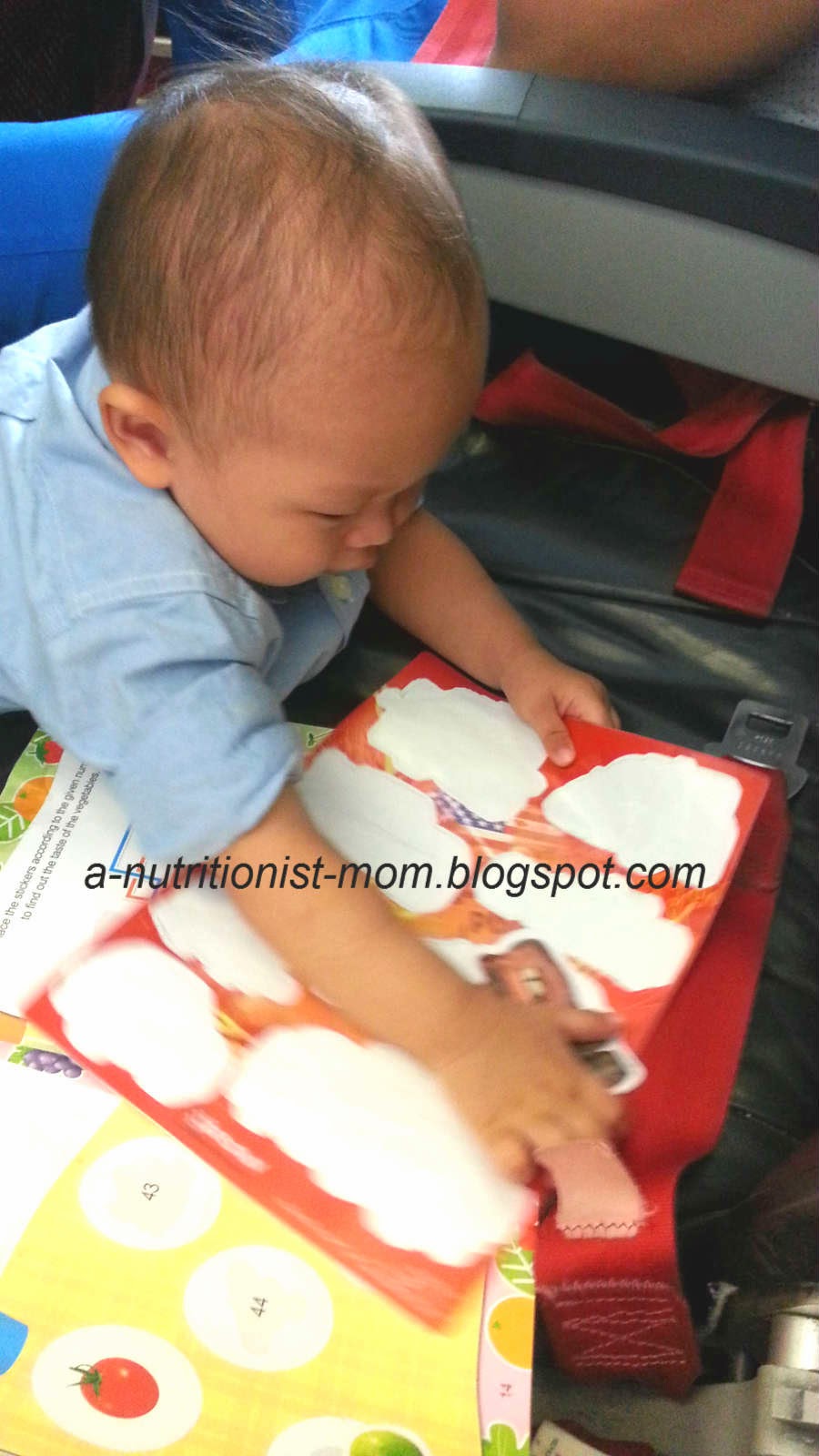 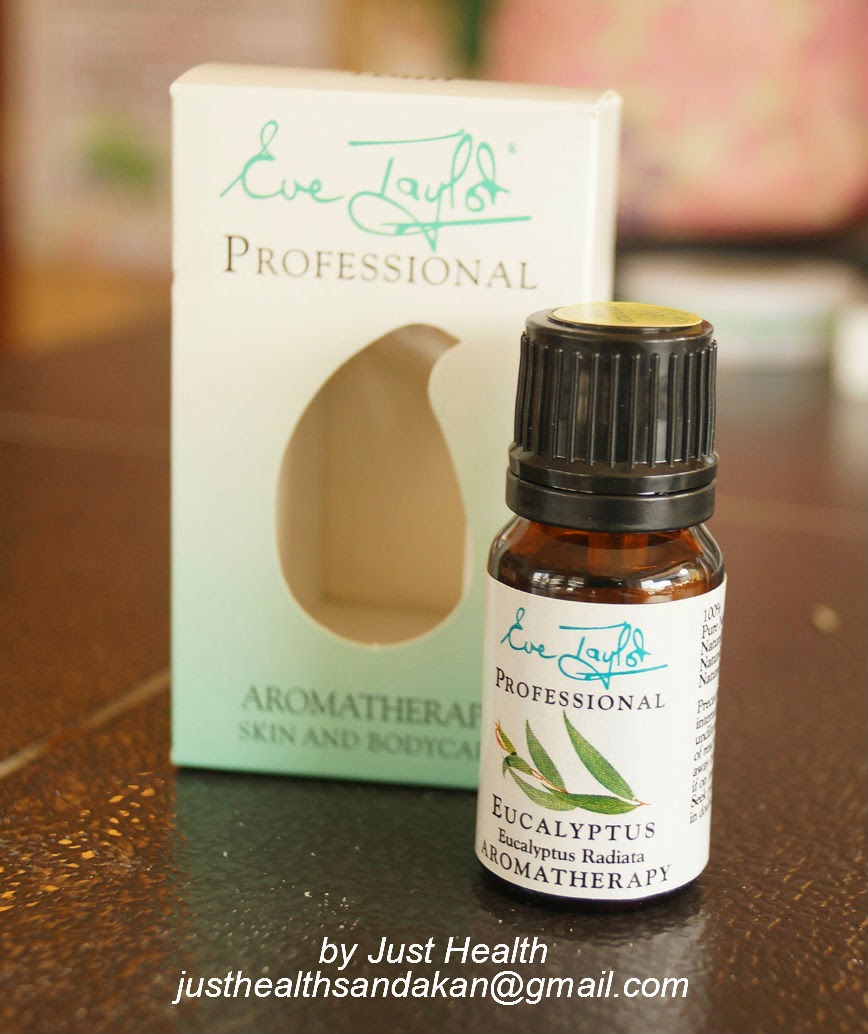 Last but not least, 'travelling light' does not happen when travelling with a little one. Don't even attempt to. ﻿

Do let me know if there are any tricks that have worked for your little ones. Happy Travelling!
Posted by Unknown at 12:02 PM