Lately, I realized most of the postings of J's tot school's activities involves a lot of art and craft. That gets me thinking, why and do I need to do something about it?

This morning, my buddy told me her daughter of 4 goes to a wardolf based kindergarten in KL, but she doesn't know how to write her own name yet. I replied her, "That's okay. Writing is an expression that will comes later on in the entire learning process. I don't see that as an issue for now." She adds on, "But my daughter draws beautifully. That's her way of expressing herself." Bang!! Exactly!! I have not made Josh write yet neither, that's because I don't see the rush. He recognizes the alphabets, the recognizes some of the words, he reads some of the words, but he doesn't need to know how to write them yet. Children will only establish a definite hand dominance (or preference) by the age of 5. Recently, I've been told that forcing a young child to write at a tender age (of 2 or 3) is harmful, as we are assuming that the child is right-handed (as most teachers or parents teach to write using their right hand). Forcing a left-handed to be right-handed causes reduced activity in the dominant right hemisphere and increase activity in the non-dominant side. The consistent use of non-dominant part of brain affects the personality while growing up and the adaptability can be difficult. More info can be read here.

Some interesting info for us to ponder on.

Now back to 蜜蜂 for bee. This is another interesting word. The character 蜂 is a bee. See the way it resembles a stinger at the bottom of the word? That's why today's activity start by learning parts of bee. His tot school activities just gets more and more interesting these days.

Prior to this, I also taught him more about honey bees using slides here. I just realized I do not own books about bees. But that's ok.

Learning about bee parts
Using the glue to paste is his favorite activity for this few months. So I knew this activity would keep him entertained while I got myself some food to eat cos I just got home from work. But what amazed me was that he managed to do everything on his own, as in gluing the right parts to the right place, that said, the activity sheet does provide clue by stating the first alphabet to the parts. Again, I used the opportunity to tell him the names and functions of each part. 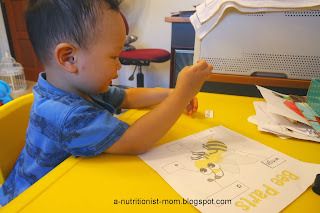 Craft for bee hive and coloring of bees
I made him paint on a bubble wrap cut out to the shape of a bee hive (with an entrance) and let him stamp the painted bubble wrap on a drawing paper. Then we colored two little bees and I cut it out for him. We then proceed to learning the word BEE and 蜜蜂.

There has been a surge of ants in our house lately. This gave me the chance to also tell him about ANT 蚂蚁。 It is so much easier to remember when there are real stuffs around. 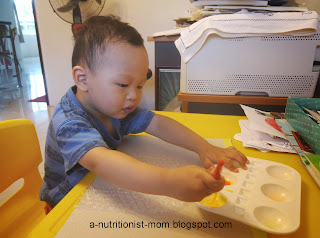 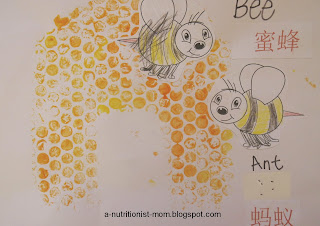 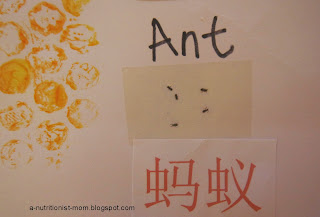 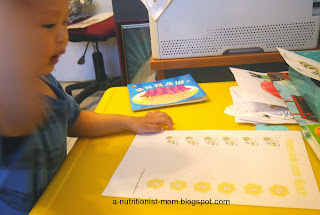 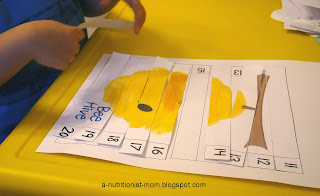 Bee life cycle puzzle
This was his number 2 ranking favorite activity, which he was still doing the next day when he woke. 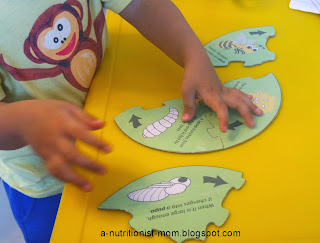 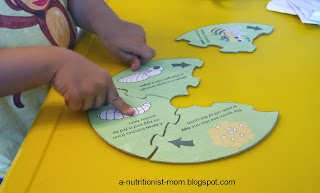 Now, last but not least, was his favorite activity of the day!
Science and practical activity of bee pollen collection

I drew out flowers and cut them out, then I placed a treat (it was organic cornflakes, cos he loves them) on the flower as POLLEN. Then I told him he's a bee, his name is J Bee. I made him go around the room collecting pollen in his sac on his legs (apparently that's what bees do). He was tempted to eat the "pollen" on the spot when he collected them, but I told him, "bees bring them back to the hive and enjoy them with their babies". He resisted and waited till he finished collecting all the "pollen". I also made him "nectar" to drink with straw. The nectar was basically honey drink. He loved the whole idea and requested to play it again and he had 2 more helpings of the "nectar". 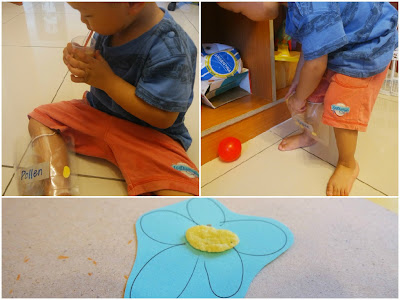 I hope this post will benefits you and your little ones, cos J has learnt a lot today.

Majority of the bee printables were gotten from this link.
http://ateachingmommy.com/2012/05/free-bee-printables/

Email ThisBlogThis!Share to TwitterShare to FacebookShare to Pinterest
Labels: activities for little ones, tot school at home