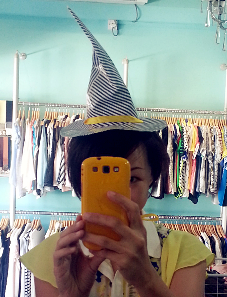 I have a feeling that there will be a series of sequel to this topic,  therefore I name this part 1. We are about one month and two weeks to the actual day of celebration and I'm already getting my hands on making his birthday deco and preparing for the birthday cupcake, as in trying out the recipe. Here are the initial details on the birthday party planning:

Drinks:  Let hubby takes care of this
Theme: Navy and White Stripes with Orange for Halloween (hopefully, you would have guessed that the photo above are witch's hat, note the curl on the tip of the hat)
Birthday cupcakes: about 50x home-baked chiffon cupcakes baked in blue polka dot liners, frosted with white cream frosting
Halloween cupcakes: 10x cupcakes topped with the witch's hat and 10x cupcakes covered with chocolate ganache, topped with marshmallow-eyes
What else are on the treats table:
*A carved pumpkin, with lighted tea-light candle
*Red eggs (gonna wrap with red color tissue craft paper)
*Marshmallow pop-sticks (sticks will be tasty)
*Meesuah with chicken drumstick
Party invite: to send out early Oct 2013, after my trip to Bangkok
Josh's costume: TBC after my BKK trip (Will DIY a party hat which is a kiddo's version of above)
Photo wall/ booth: Backdrop with letter 'Happy __ But Day' made with Josh's flash card, the guest will hold a red color '1st' prop for photo, standing in between 'Happy' and 'But Day'
Birthday banner: made with navy and white stripes wrapping paper, with letter Josh turns 1.
In fact, I still have a lot of other ideas for the party, some activities eg cupcake deco or smoothie making for the kids, but lil' fella is only turning one and he would not be involved or find pleasure in them. I shall leave them for his second b'day party.

Email ThisBlogThis!Share to TwitterShare to FacebookShare to Pinterest
Labels: birthday